There is also a Java version of this guide

In a previous guide we built a basic autograding solution that could automatically run and test your students' assignments. However, there were still some manual steps involved: you needed to navigate to each student's fork of the assignment and kick off the tests manually.

In this guide, we'll show you how to take it a step further and build a centralised grading server. Your students will be able to submit their assignments to this server, and each submission will automatically kick off the tests, assign a grade, and create a summary report of submissions and grades for you to review.

This guide shows you how to build the solution step-by-step. If you just want to get it up and running as quickly as possible, you can follow the quickstart guide instead which shows you how to get started from our template repls.

Note that you'll need a subscription to Teams for Education to follow this guide as it is presented, but you should also be able to adapt it to run using a normal Repl.it account if you need.

We assume that your students are learning Python. We'll give an example Python assignment and an example testing suite using PyTest. We'll use Flask to create the centralised grading server.

Overview of how the solution works

The basic workflow is similar to in the previous guide, but this time you won't need to look at each student's fork individually. Instead, students will submit them to a centralised server, and you can view their code there, or just look at the summary report it will generate. 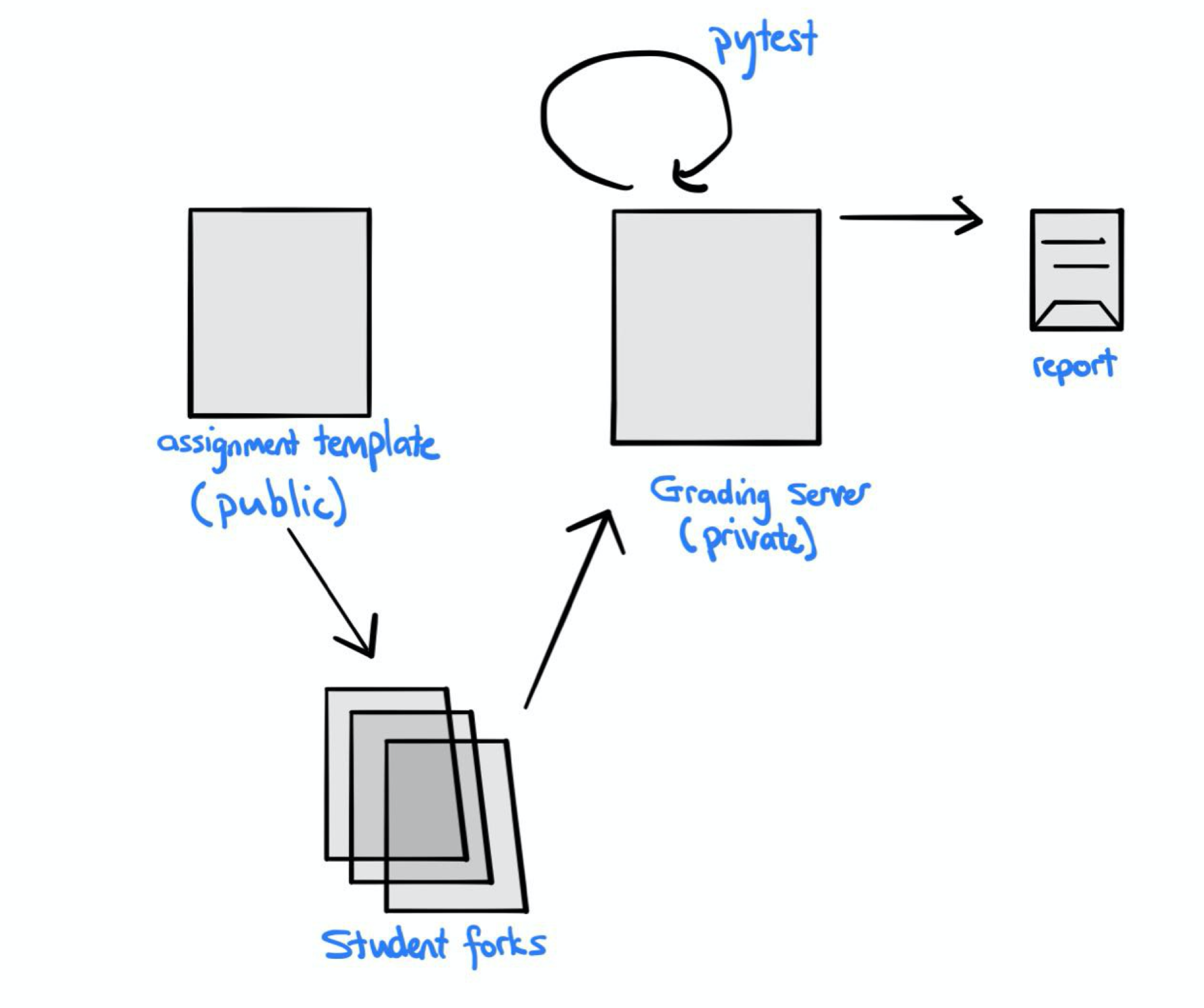 After a student forks the assignment, they will be able to write their code, test it on their own, and then submit it when they are satisfied with their answers.

The grading server will not be visible to students, so they will still not be able to view each other's work or grades.

Setting up the grading server

We'll start by creating the grading server. We don't want to share this code for students as it will also host copies of their submitted assignments, so we'll have to make sure to not publish this project. 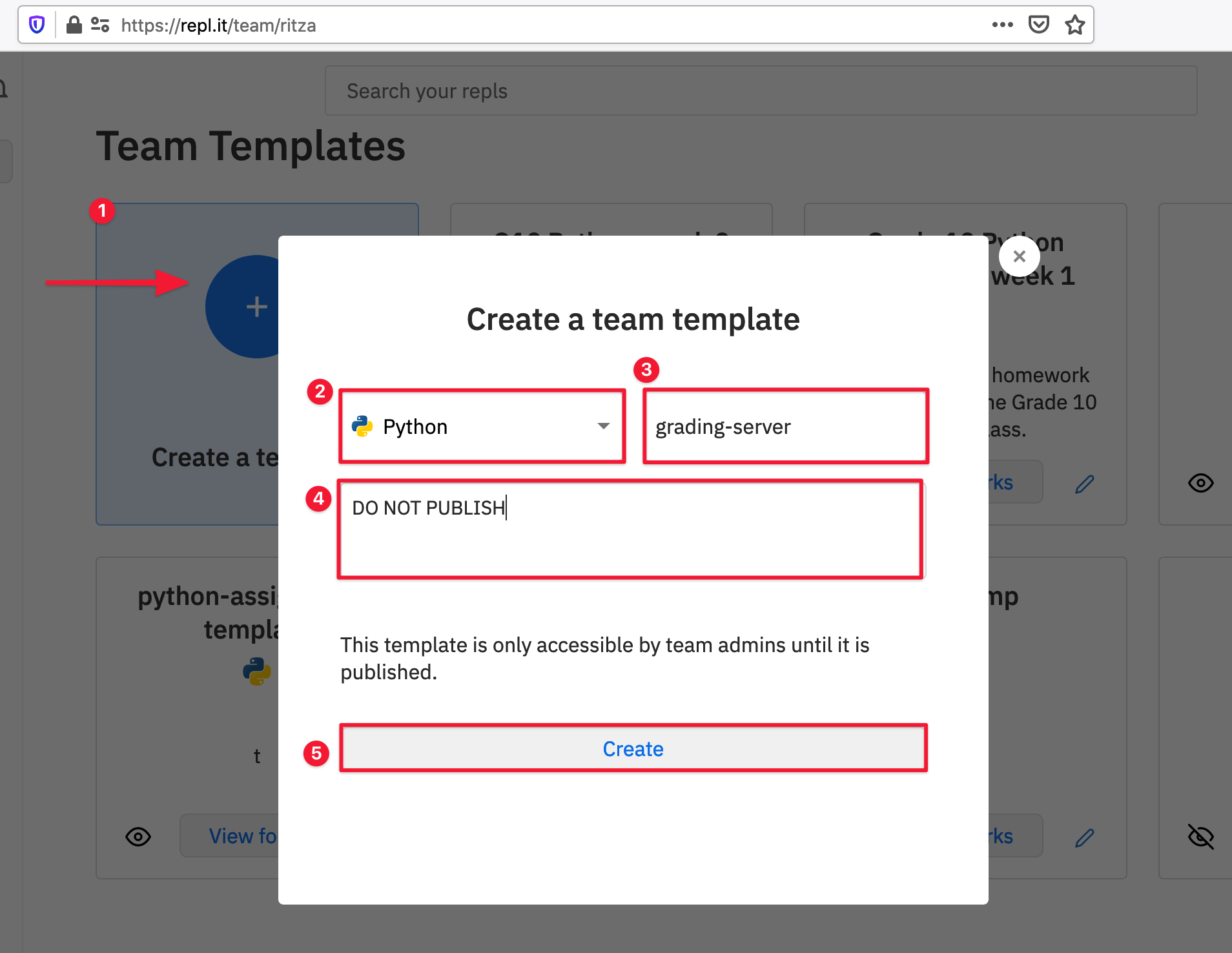 Our grading server will consist of a few different components, namely:

Creating the server in main.py

In main.py add the following code

This brings in the imports that we need and initialses a Flask application.

Immediately below this, add three helper functions that we'll use in the main submission process.

The first function, extract_student_number reads the first line of the submitted code file and looks for a student number. In the assignment project we prepare later, we'll show students how to format this correctly

The second function save_submission creates a new directory on the server using the student number and populates it with the following files:

If the student has previously made a submission, it will add "-1" to the end of the directory, or keep incrementing this number for each resubmission so you can keep track of each submission a student makes.

The last function, run_tests(), calls PyTest. Instead of invoking PyTest from the command line as we did in the previous guide, this calls PyTest from within our Python code so that we can programmatically extract the results and save them to the report.

Finally, add the following code, also to main.py, below what you already added.

This waits for a file submission and then tries to grade it. If the assignment is not in the correct format or if anything else goes wrong, it will log an error to a file called "errors.txt".

For demonstration, we're going to assume that the homework assignment requires the students to write two functions:

You can adapt this to your actual homework assignment as needed, but we recommend that you first make sure that everything is working with this simple example before you write a more advanced set of tests.

Each student's main code file will be saved with a unique name (e.g. mainJS1337A_1.py) so we don't hardcode the import for main.py in this file. The server logic will take care of adding the correct import line when it creates a copy of this file for each submission.

Creating the configuration for PyTest

Finally, we need to create a special file that PyTest will trigger automatically when we call it from our main.py file. Create a file called conftest.template and add the following code.

The variables are automatically passed in by PyTest and contain information about which tests passed and which failed. This code only extracts a basic summary of how many tests passed and how many failed and we give the student a grade based on the percentage of tests that they passed.

The logic in main.py that you created earlier will copy a new version of this for each submission with a unique name. This is important to stop the tests conflicting with each other as PyTest keeps a local cache of tests for efficiency.

That's it for our server. Press the Run button and your server should start running and display an "OK" message, as shown below. (Take note of the URL, which is based on your team and project name, as we'll need to add this to the student assignment that we create in the next step.) 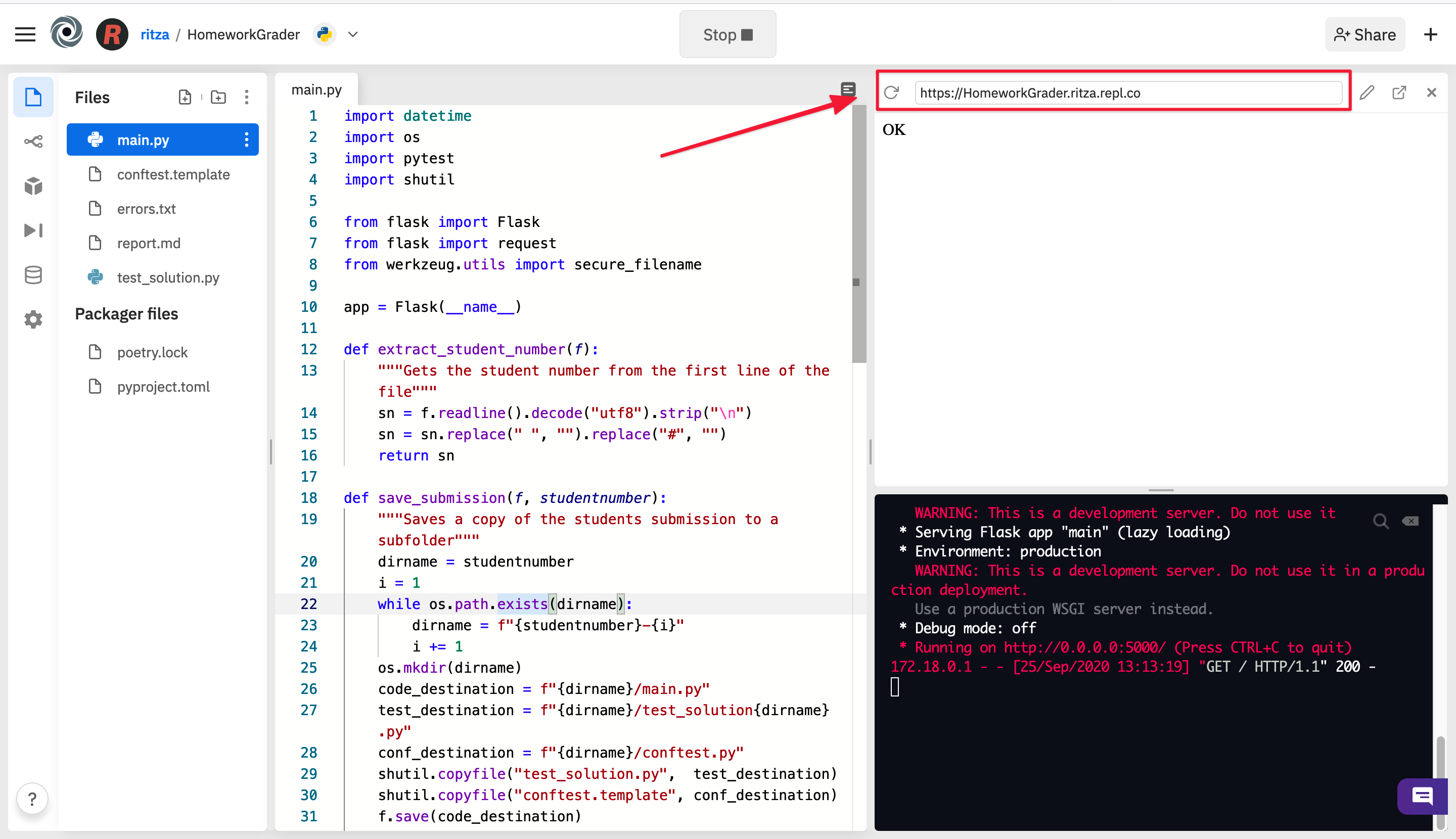 Setting up the assignment

Now that we have a server, we need to build the other half: the assignment project for students to fork and submit.

On your teams page, create a new project. This will be specific to a single assignment for your students so call it something like "Grade 10 Python homework week 1" so you can keep track of different assignments for different classes. 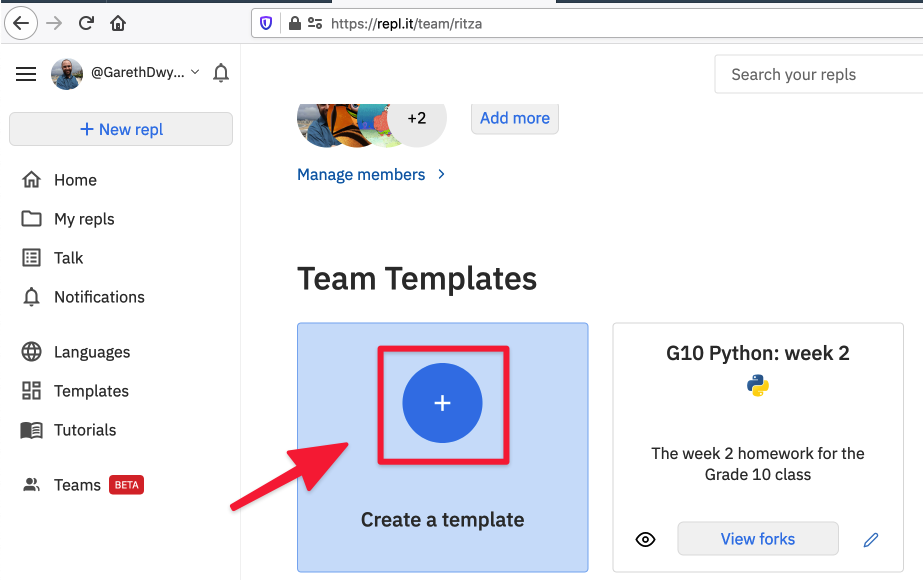 Add the code for the assignment

In the main.py file, add the following code.

Change the comment on the very first line to match the format of your students' identification numbers. This will be used in the report that the server generates and also for the directory names that it uses to store the students' code.

The two global variables at the top indicate whether the student is ready to submit or not. By default, the code is in testing mode and when the student presses the Run button, it will run their code and display the results to them.

Once they uncomment the # MODE = "SUBMIT" line, it changes to submission mode. Now when the student hits the Run button, it will submit the code to our server.

The add() and subtract() functions are starter code for the student to work from. The test() function runs these functions with some sample inputs and shows the results to the student.

The main() function checks what mode we are in and either runs the code locally or submits it to the server.

Create a new file in the project called submit.py and add the following code.

Change the URL to the one that you copied in the final step of the server setup, as this is where the students' assignments will be submitted.

Testing it all out

To make sure that everything works as expected, run the project. It's still in test mode, so it should run the two functions with the example inputs and display the output. Because we only have the starter code, we can see that the functions don't work yet.

Now fill out the two functions so that they look as follows. Note that we have a deliberate error in the subtract() function to make sure that our grading is working as expected.

Hit Run again and you should see that the functions return results now.

Uncomment the # MODE = "SUBMIT" line and press Run again. This time it should submit the solution to the grader and return a confirmation message.

Fix the subtract function by swapping b and a as follows and submit it one more time by pressing the Run button. This lets us test that resubmissions are working.

Finally, change all of the code back to how it was as this is the version that students will fork and we don't want them to have the solutions. Recomment out the MODE = "SUBMIT" line and remove the return statements, replacing them with pass instead.

Viewing the submitted code and report

Navigate back to your grading-server project and you should see some new files and folders that have been created by the grading project.

In each of these folders, you can see the code that was submitted.

You can also see report.md has been generated, with details of the two submissions (who submitted them and when) and their calculated grades. 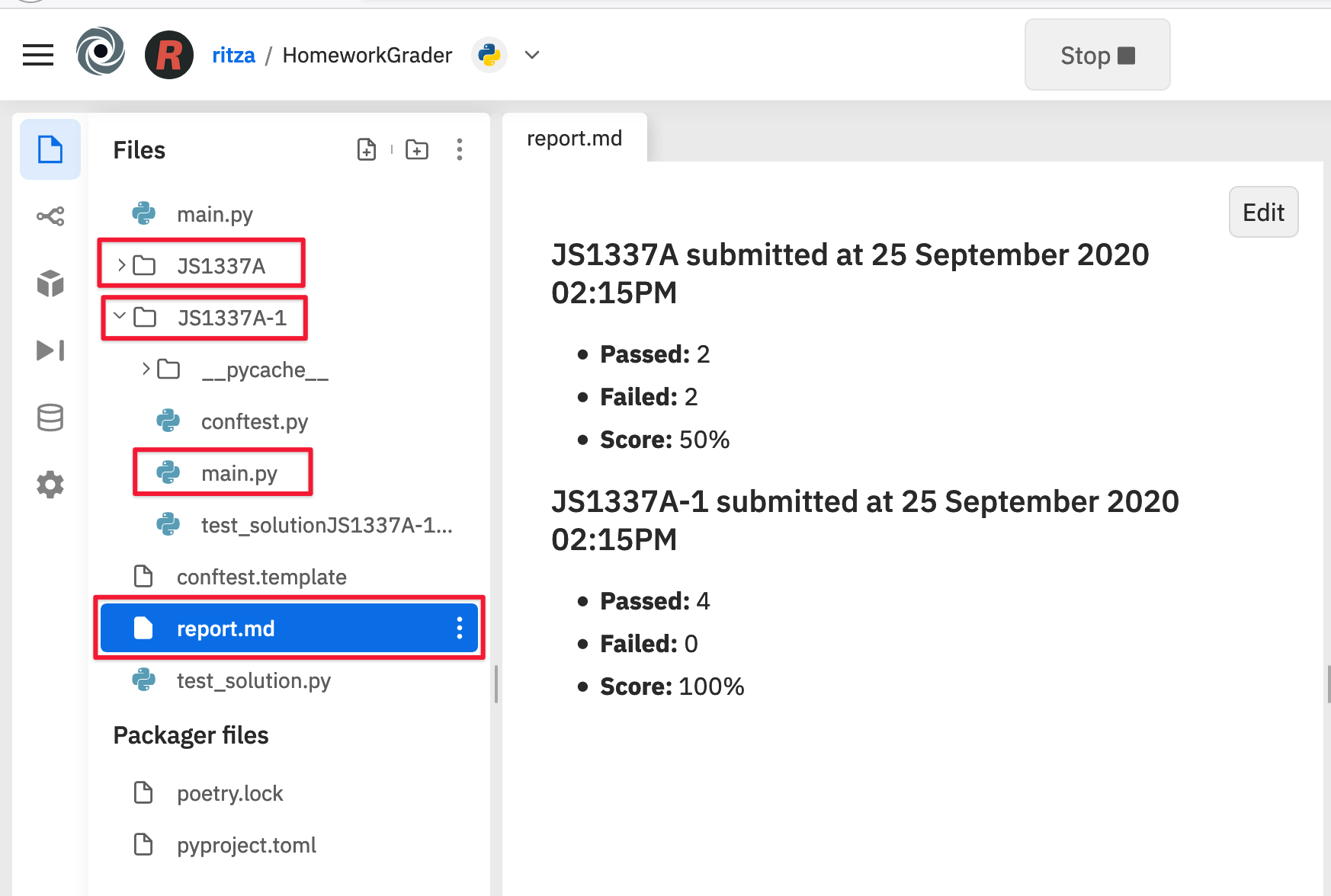 Publishing the project for students to use

Once you are happy with the assignment, press the "publish project" button in the top right. Students will get a notification that their homework is ready and be able to create a fork, modify the code, and submit it to the grading server.

Leave the grading server running (don't press the "Stop" button) so that the students can submit when they are ready. You can visit your server URL (that you pasted into the submit.py file) to make sure that it stays up (it should display "OK" if everything is running as expected. If you see an error or the page does not load, navigate back to the unpublished project file and hit the Run button again.)

Now you have a robot to take care of most of your grading for you which should save you a bunch of time! In this guide, we showed you how to set up an autograder, but you might like to extend it on your own with some additional features. For example, you could

We've focused on Python in this guide, but you should be able to adapt it to testing and grading submissions in JavaScript, Java, or other languages, with some work. In future guides, we'll give examples of how to do this.